HIPS: With your feet together, measure around the fullest part of your hips to ensure you’ll have enough room to move comfortably. 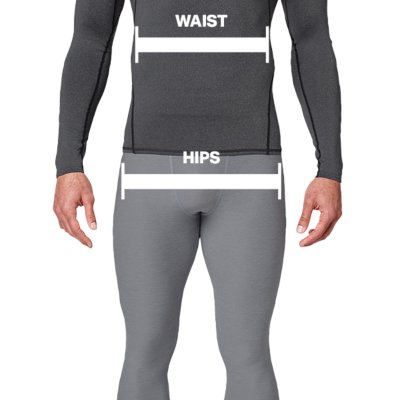 The charged compression leggings provide excellent fit and compression. They are very comfortable.

I own 3 of these shirts, although I admit that the stitching has started to unthread slightly (nothing a pair of scissors hasn’t solved) I have had no issue whatsoever with these. I train Brazilian Jiu-Jitsu 4-6 times every week and I’m always wearing one. I originally pulled a hernia in my lower abdomen which bought me to compression, and since then I have not looked back. They do looks very small when you first get one (but they are compression so that’s the point) and they can be a pain to get off at first until you figure out a way that works (my partner had to help me for the first few tries as it was super tight) but it is completely worth it in my opinion. I own countless rash guards, leggings etc and so far nothing has come close to the compression range from under armour (no, I’m not a bot lol). If I don’t wear it I don’t feel as protected and my body feels like it takes a greater beating during training, plus I feel safer from ever pulling another hernia. I have tried the heatgear compression but unfortunately, in my opinion they are not on the same level as the charged compression. You get what you pay for and again in my opinion, when it comes to the compression range that is true. I aim to have four pairs of each as I do not want to over wash them and risk the loss of elasticity in the clothing, I just wish Under Armour would hurry up and restock so I can order more to be honest. My rating, 5 star although when not on sale they are pricy but as I said before, you do get what you pay for. As that Fri from Futurama meme says, “Shut up and take my money!”

Bought the ling sleeve shirt 12 months, loved it except sleeves too short but tights are not usable because the back slides down and hangs in crouch causing rub and discomfort. Can only use them as recovery unfortunately. They do that well as I can constantly pull them back up at the back when in private.

Normally I wear M size but this one too tight to pull up (can't pass knees even) so exchange to L which merely OK. Not as elastic as other brands I have. Not necessarily a bad thing but they feel quite differently. They wrap legs very firmly to provide support which does it suppose to do.

These are fantastic compression leggings. Looks: These leggings are apart of probably the best-looking compression set I've come across. They match with most activewear and look great combined with all lengths and types of shorts, I would recommend black or red shorts though. Compression: These are a whole new level of compression. I bought them for yoga, weight training, running and BJJ, however, I would only recommend them for running and weight training. They're just so tight that you lose a lot of flexibility when it comes to yoga positions or rolling on a mat. That loss in flexibility, however, equals a lot of support when it comes to squatting or running, so they're amazing for that. Quality: Some under armour gear can feel cheap or low quality. These leggings do not. The stitching is great and feels strong as well as the fabric, which is what you would expect from this price point. As far as the magical healing properties I mean... the box says you have to wear them for 24 hours to get that effect which is ridiculous and even then unlikely but ultimately you buy these because they look sick and are great quality. (I got them half price on sale). ((I also have the short sleeve top which is exactly as good and I would recommend for yoga, weight training, BJJ and running.))

The fit is excellent the size was as stated, the only thing for me the leg length jut a bit too long but I have found them of great benefit with all the walking I do there is better muscle control, need less recovery time Have had others before but the Under Armour for me has the best fit and comfort

Wasn’t sure what this would feel like, but definitely loved the feel of the material, the compression feels good after a long day and workout. Ordered the shirt to match, and both feel pretty amazing. Great product.

Good product, not so durable

I will give this product credit, it does do what it's supposed to do. Unfortunately it's durability does not. After about 7-10 uses (2 months). Tears developed along the seems in the crouch area. I understand when doing leg activities, there is a lot stress put in this area, as far the product itself goes. For the price, I would have expected this issue to be addressed before production of the product. Now I have expensive compression pants with a large hole in them. Please consider your durability needs when purchasing this product.

Gives you that 'super' feeling.

I found the Charged compression leggings and shirt to be accurate when it comes to quick muscle repair. Wicked expensive but worth the investment.

Overall a nice purchase. Have been using it for over a month and finding it really useful for regular workouts and running.